PainDog wrote:I like the fight but the gimmick belt is unnecessary

It was cool when nate said it.

i would have liked the belt idea more, if Nate was the champion,already,by beating Pettis & Conner(x2)... but now... i dont know man....


We've seen how Nate treats 'title fights'. He basicaly put up a fight, for 1 minute,against Bendo.


maybe the fact that it aint a proper belt will be the difference... and Nate will be unfaced.
Τίποτα

The belt is for the fans. Nate and Masvidal don't give a shit.

PainDog wrote:I like the fight but the gimmick belt is super unnecessary

I like the idea of an actual belt. I'm at the point in being an MMA spectator where I don't care about rankings or technique or title shots or any of that BS, I just want to have fun. Like when you're a music fan starting out and you only want to listen to technical progressive goregrind from Iceland and after many years you just want something with a catchy chorus.

Masvidal is all about that money huh?

Nate vs Jorge
Till vs Gastelum
Anderson vs Johnny Walker

Luque vs wonderboy also on this card.

WHERE THE FUCK IS PONZINIBIO. that guy is a fuckin cheater who doesn’t want top guys.

Luque ponzinibio was the fight.

I can't really cosign the whole "fun" aspect of this fight. It's fun in a sense, as in, it wasn't a brewing matchup or rivalry or title contender situation. It is a badass fighter, essentially, just calling out another badass fighter, to see who's better. This is like gym sparring type shit. Or street shit, between the homies. On a philosophical level, this is the martial arts shit, that everyone claims to be apart of, but seems to have forgotten, in lieu of sports and entertainment.

The flipside is this, Nate called out Masvidal who just had that crazy KO against Ben Askren. This is arguably the best decision in terms of popularity and interest. McDuck is somewhat out of the picture, and a very entertaining fight would end up being Masvidal. It's kinda brilliant marketing too. It's respect, whose the better martial artist, and baddest mufucka...smart shit.

I will watch this with the keen eye, looking for the exchanges, takedowns, jiu jitsu, etc. This is a repertoire fight, whose is deeper? Who has an answer for who. I expect some technical shit that just devolves into slugfest from the gut/heart shit. I'm excited about this fight over anything else happening the rest of the year.

dipset52 wrote:Nate vs Jorge
Till vs Gastelum
Anderson vs Johnny Walker

Anything else so far?

Ahh my bad. Not Anderson Silva.

i think Johnny walker is Gona hurt this guy

You sir are a much better matchmaker than whoever the fuck is currently doing it for the UFC. I love both of these matchups.

Gillespie and Islam would be such an interesting grappling bout
Officially 8-2 in sig bets. *pats back* 5 time A league champion. 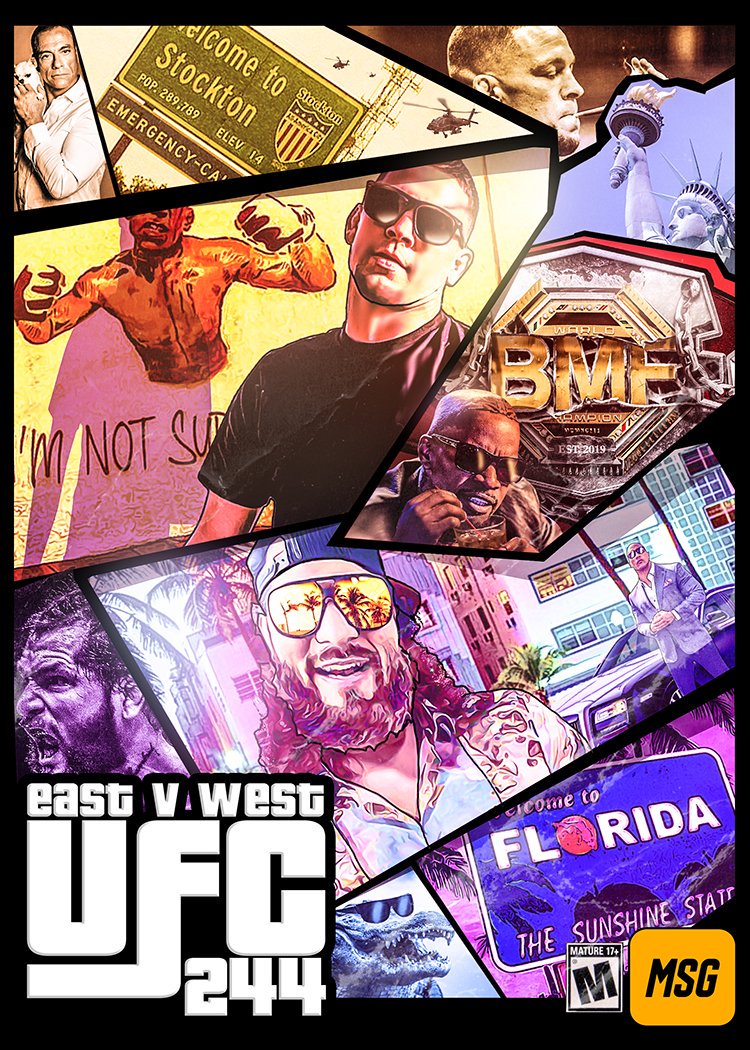 that is a dope graphic - where did you find it?