Chuck Liddell recounts the time a nightclub DJ believed he could take a body shot from a UFC legend
https://www.mmafighting.com/2021/5/4/22 ... ufc-legend It’s hard to imagine anyone volunteering for Chuck Liddell to hit them but back in 2009 that’s exactly what happened when the UFC Hall of Famer visited a nightclub in Kentucky.

At the time, Liddell was traveling to the Kentucky Derby while working on a potential business deal to invest in a restaurant. Because the horse race is a full weekend event, “The Iceman” ended up at a nightclub with some friends where he was hanging out, having a few drinks and just enjoying himself.

That’s when Liddell met the DJ at the club, who had an all too familiar request for him.

“We’re out there for the Kentucky Derby and I was out one night at the club,” Liddell explained when speaking to MMA Fighting. “This DJ comes up to me and goes ‘I’ve been training, I think I can take a body shot from you.’ I’m like no you’re not, I’ve been drinking and I don’t want to hit you. We talked for a minute and he’s like ‘can I at least announce you’re at the club, get up on stage with me?’ and I said sure.

Now according to Liddell, as bizarre as it sounds that anyone would ask for a punch from him, it was actually more common than anyone might think.

Years earlier, Liddell had made an appearance on a radio show hosted by Jason Ellis and he was asked to punch the former professional skateboarder as hard as possible.

The video of the incident went viral, which then led to Liddell being asked by a whole host of people to take a punch from him — a request he never quite understood.

“Oh my god. After the Jason Ellis thing, I had a lot of people who wanted me to hit them for some reason,” Liddell said. “I hit Jason Ellis in an interview and after that I had so many people asking me to hit them. It was funny.”

In this particular instance, Liddell had no desire to punch anybody but the DJ calling him out on stage changed the situation for him. At that moment, his reputation was on the line so he couldn’t just tap the guy with a small shot and call it a night.

The DJ wanted a body shot from a former UFC champion and that’s exactly what he was going to get.

“Is he really going to do this?” Liddell recounted. “I mean if we were at a party, I used to hit people every now and again if they bugged me long enough to hit them. I’d tap them, not real hard but just enough to hurt them a little bit. Like a body shot just enough so they know they got hit. Not enough to drop them but I’m giving them a liver shot. But now he’s putting me on blast in front of everybody saying I can’t knock him down with a body shot.

Eventually, the DJ made it back to his feet after realizing he could not in fact take a punch from Liddell.

It wasn’t until the next day that Liddell ran into that DJ again, except this time he definitely wasn’t asking to take a shot from a UFC legend.

“It’s all over with, we said goodbye to everybody. He catches me the next day and he says ‘hey, you broke two of my ribs, it’s bad,’” Liddell said. “And it’s like sorry? My bad. He was cool about it. He was like ‘I’m an idiot, I shouldn’t have done that’ but it was pretty funny. You get hit with that liver shot, he’s just rolling on the ground. It was pretty funny.

“I told you no. I’ve been drinking and I don’t want to do this right now. You put me on blast in front of everybody, I’m going to hit you hard.”

As memorable as that night was for Liddell, he did make it to the Kentucky Derby that weekend, although he can’t say that the actual race left the same kind of impression on him as the DJ who was begging for two broken ribs.

“I remember that more than the race,” Liddell said with a laugh. “We went to the race and I met Cal Ripken Jr. at the race so that was cool.” Re: Don't let Chuck punch you 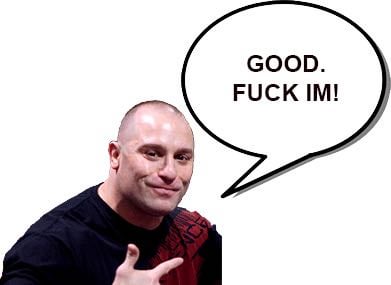 Re: Don't let Chuck punch you

As i was reading i was thinking exactly that, if he catches any bone that bone is going to shit....its was 2 bones!!