Former UFC light heavyweight contender Ilir Latifi is making the move to heavyweight, where divisional powerhouse Derrick Lewis is expected to act as his welcoming committee.

MMAWeekly.com sources confirmed the news following an initial report by ESPN that Lewis and Latifi have verbally agreed to fight. They are expected to step into the Octagon opposite one another on Feb. 8, 2020, although a location and venue have yet to be finalized. Sources indicated that Houston is under strong consideration for the fight.

That location would make sense, particularly because Lewis resides in the Houston area.

Lewis (22-7, 1NC) has fought for the heavyweight title, losing to Daniel Cormier at UFC 230 on Nov. 3, 2018. He followed that setback with a loss to former champion Junior dos Santos in a Fight of the Night effort earlier this year in Wichita, Kan.

Lewis most recently got back in the win column with a split-decision nod over Blagoy Ivanov at UFC 244 on Nov. 2 in New York. He'll hope to add to that victory and continue his climb back into the title picture.

Latifi (14-7, 1NC) has struggled to remain in title contention at 205 pounds, so he is going to test the waters in the UFC's heaviest division. He faces no easy task in his first heavyweight bout in Lewis, jumping immediately into the deep end of the pool.

Having made his way into the UFC as a late replacement to fight Gegard Mousasi in UFC Fight Night main event in his home country of Sweden in 2013, Latifi has constantly been on the cusp of earning a title shot, but has never gotten the win that would put him in a championship bout.

Following back-to-back losses to Corey Anderson and Volkan Oezdemir, it is time for Latifi to rebuild, and he plans on doing so at heavyweight.
I'm so fucking high.

This guy is prelim talent. A fckn can Hopefully, Lewis lands some legendary haymakers and ktfo's Latifi before he manages to make it a snoozefest wrestling clinic 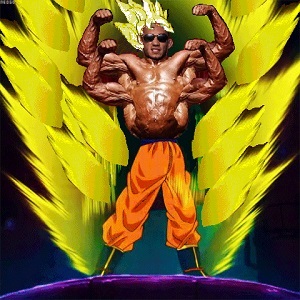 kezzaman wrote:As long as Latifi has never hit a woman he should be fine

I can see Lateffii grinding a 3 round decision, maybe.