Good post. Iv always been a big bonner fan. Can't deny the epicness of the tuf 1 finale. Always cheered for him. He nearly ripped Irvins arm clean off that kimura was twisted so far back. A goofy warrior indeed. 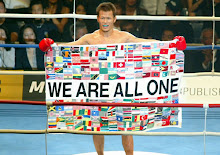 I believe he is a carlson gracie blackbelt

Real respect from me for guys like bonnar, lytle din thomas and rumina sato. Underrated careers who we as fans need to make sure are not lost in our memories as time pass.

Bonnar had a lot of fun fights. Glad to see he is doing well now a days and I hope he has done well with his money

Good post sir mr sir. I enjoyed reading through it and looking at the things you huuuuuumons call "pictures"
Officially 8-2 in sig bets. *pats back* 5 time A league champion.

I 've always had mixed emotions when it comes to Bonnar. I originally thought he was a proper dork when the ultimate fighter was on. He had some really weak confortation with Diego, in where he barely 'won'. Anyway..


I still believe to this very day that he is a geek.


A geek that is indeed a pro - per warrior though..

He started gaining my sympathy after getting robbed by the judges in the Finale. Then he opened his mouth and he lost me again. 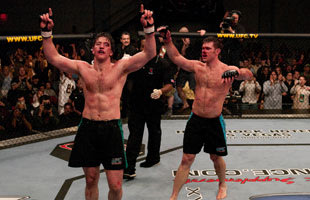 I can hear you thinking.. Who the fuck cares dude? why make a thread about fucking Bonnar. Well cuntheads...

I was checking wiki pages and i checked Bonnar's(after Tito's) and I noticed something that is indeed worth mentioning.


He has only lost to former MW + LHW - UFC champions. +eye poke by sozsinski whats his name.


Are u impressed motherfuckers?

Are u fucking impressed?


Solid jiu jitsu. Good boxing and TWD?. But i think he lacked knock out power + charisma. He didnt have the superior mentality that is needed to be a champ. 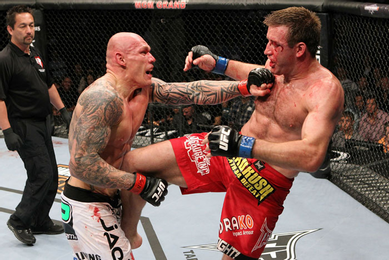 
His fight with Rashad was uneventfull but proper close,.

He could have be the winner in the finale and should have had a loss to Jardine, as he was sort of gifted a decision.

He had a really solid performance against the former WEC HW champion + LHW + HW + MW and not WW contender, James Irvin. Who he defeated with a Kimura.

He showed some strong knees in his fight against Soszynski? (in the rematch) and that was in my opinion the only performance he has had in his UFC career in which he seemed able of actually really hurting his opponent. Or like a human being in general.

Cant say i wasnt impressed. I didnt expect him to be able to really finish someone with strikes on the feet.


No matter what, in my head he will always be someone like sort of a strong Michael Bisping, when it comes to KO power.

I present you one of the most unappreciated MMA icons of all time. The awkard but always dangerous, the Carlson Gracie BJJ blackbelt, former 2 time Golden Gloves HW champion, former longtime UFC LHW top 10 contender, The American Psychoooooooo I want to suck you dry right now.

Frag, you are hands down my favorite linker of all time now.

I rocked the Bonnar Avi when I first joined linker.

I had Bonnar over Silva back in the day

You made my day man, seriously.

I almost had a tear drop like a little bitch.

FUCK!!! Your the fucking man Frag.

P.S He's in the fucking hall of fame for a reason bitches So you move to England or what? ..Never remember you sounding so english

bwawm wrote:So you move to England or what? ..Never remember you sounding so english

most of the times i type shit without really thinking about it. and i tend to reply when im pissed off.. I can assure u, since i joined this site my english is getting only worse.

Hahahaha nah I meant like the word choice an slang sounds like you lived there for at least a few years (8 years'll do it!) but you sounded Englishier than normal....we do terrible things to the language were I'm from so no judgment at all brother

Failed 2 drug tests for anabolic steroids...dude is a joke.

Lucky for Bonnar he fought a prehistoric version of Tito and not the real cardio king Tito...still got handled tho.

Bonnar's great....as an announcer. But as a fighter, he literally has the grace of 350 lb. silverback on ice skates. Who took a handful of Valium....With alcohol.
"Back in MY day we didn't have rounds, rules, weight classes, training camps, high protein diets, HGH or TRT.... Bullshit."

This is a Bonnar war wagon bitches.

Keep your biased bullshit to yourselves.

Warwagons have to be titled as such. Also, how can you have a warwagon for a retired fighter? Is he entering a buffalo wing eating contest?
"Back in MY day we didn't have rounds, rules, weight classes, training camps, high protein diets, HGH or TRT.... Bullshit."

Lucky for Bonnar he fought a prehistoric version of Tito and not the real cardio king Tito...still got handled tho.

Agreed. I also thought it was a pussy move for him to retire immediately after the Anderson fight since he knew he was going to piss hot for steroids. It made seeing Anderson knee him that much more satisfying in hind sight.

Stopped in to say,

This is precisely the kind of random post that I enjoy on MMALinker. You make good points. Bonnar was a pioneer, and his role in boosting the popularity of this great sport can't be underestimated. He was an exciting and skilled fighter -- and he evolved with his jits.

I will say that addressing the esteemed members of MMALinker as "cuntheads" is perhaps unnecessary.

He lost to a 45 year old washed up Mark Coleman. I don't think that helps his case even though Coleman was a former champ. Coleman was a joke at that point which makes bonnar even more of a joke.

pitbull103 wrote:This is precisely the kind of random post that I enjoy on MMALinker. You make good points. Bonnar was a pioneer, and his role in boosting the popularity of this great sport can't be underestimated. He was an exciting and skilled fighter -- and he evolved with his jits.

I will say that addressing the esteemed members of MMALinker as "cuntheads" is perhaps unnecessary.