BallstofistTechnique wrote:Spirulina is the highest % protein of any food I think. Its also has way more nutrients than any other food that's been listed.

I would be concerned about the bioavailability of the protein in spirulina - has this been tested? Many plant based proteins are not what they seem including nuts etc... I would also be very concerned about the price of these kinds of 'super' foods - how much does liver or eggs cost again?

BallstofistTechnique wrote:Goji berries are cool if you want a fruit that has protein. Its also really good for your blood (necessary for muscle growth) But you can basically only get them dried unless you grow your own.

why would you look to berry's for protein? - that's extremely odd. Unless you were a vegetarian / vegan eating these kinds of foods seem unnecessarily expensive and faddish. Eating cheap seasonal fruits would be a much better idea than selective and expensive 'super' foods from exotic places.


Spinach is however a great food to have - mainly b/c its inexpensive and full of great nutrients. I'm not saying spirulina or goji berry's aren't good, they are just too expensive and could easily be replaced with local produce that offer equally beneficial nutrients. PsychoBells wrote:How sad is it that a perfectly decent human being and warrior like Shogun gets hated-on by miserable autistic virgins? smh

I was just thinking.. to they have apples in china? Or kale?
Or whatever is typicall western and is pretty healthy.

Would it be superfood there?
It seems thought to giji/acai/mangosteen etc do really
have much higher anti oxidant values making them healthier.
http://mmavideo.wordpress.com 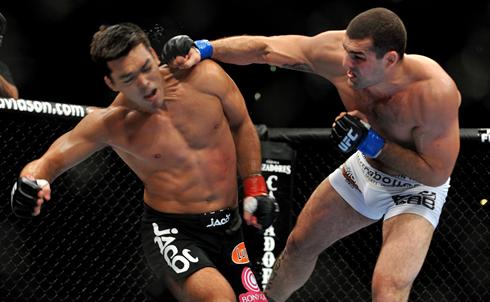 nicknite86 wrote:Legumes- Legumes are an excellent source of protein and fiber. Fiber is critical as it keeps blood sugar and energy levels stable. As far as plant foods go, legumes are high in protein and are a great source of slow releasing complex carbohydrates. Carbs are known to provide a more stable and lasting energy supply for workouts. Legumes can be eaten in soups, chili, stews, or in cold bean salads. You could buy them dry, canned or frozen and basically any supermarket. The most common of legumes are pinto beans, kidney beans, navy beans, lima beens, black beans, lentils, chickpeas, and black-eyed peas.

"Fiber is critical as it keeps blood sugar and energy levels stable" - so does non-fibrous dense protein sources (read: animal protein) thereby making fiber from legumes not "critical" (because healthier things can fulfill this function)
"As far as plants go, legumes are high in protein" - that's like saying "as far as super slow cars go, that one is pretty fast". Let's not forget about the antinutrients. The trypsin inhibitors and lectins in legumes are proteins and are therefore credited towards your "high in protein" claim (as far as plants go, that is); yet, these proteins will just interfere with the digestion of other essential nutrients. You warned against "empty calories" (i.e. calories with no nutritive value); legumes turn otherwise non-empty calories into empty calories. As far as protein goes, legumes are "third-world protein"; if animal protein is available, why bother with this junk?
"the most common of legumes" - what about peanuts? i hear they are pretty common. Oh, and soy (don't even get me started on this garbage).

Oh, and back to the lectin in legumes: lectins are thought to lead to leptin resistance. Leptin is the signal for you brain to say "i'm full" (among other things). When one is leptin resistant, his/her body must send more and more of the stuff to your brain to get the same effect. Not worried about that? Well, only insulin and, you guessed it, leptin are known to be adiposity signals (i.e. they tell your body to store stuff as fat, which isn't muscle btw).

Really informative, and an interesting read. Thanks
fast weight loss | how to lose weight fast

Fiber is good and also i prefer red meat in this case because meat is very powerful diet in case of making muscles and also it is the best option.
personal trainer orange county

It is a good discussion about healthy foods for muscles.It is important for everyone specially for those people who want to be a bodybuilder.it is informative post and i really like the discussion.Thanks for posting such a valuable ideas and information.
physical therapy billing

i've learned that legume proteins aren't complete proteins it needs to be mixed with grains in order to form a complete protein therefore digest into body. i'm sure having legume and grain (eg rice with beans) kick so much fucking ass just like the fart you'll be releasing the next 24 hours

Hi! I would add-Spinach. One of the most alkaline foods. Spinach prevents muscle & bone loss, but also cancer and heart diseases because of its high nutrient profile;Water. Your body holds water if you don't drink enough. Drinking prevents water retention, helps muscle recovery and prevents dehydration from strength training.