Wrestling, jujitsu, ground and pound or submit your opponent for the victory
Forum rules
Post a reply
13 posts • Page 1 of 1 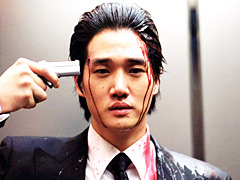 heli arm bars are so sick. i love them

I'm going to be honest.
I've never seen or heard of that before.
In a year of training.

Looks like a bitch to full off.
You've got to pimp out your butterfly guard.
I'll try it on small people.

WTF i've never seen that before, i'd love to see someone do that in mma

Suicide?? No, I'd rather vacationcide and come back when it gets boring.

Nice arm bar. Hard do with out a gi. Hermes Franca tried it on Frankie Edgar though.

Wow that is a crazy move, never seen it before. Be so hard to pull off.

we practice that one from time to time. my instructor weights only 145-150 and i'm 230, he demonstrated it on me and held me up a good 20-30 seconds while explaining to the class. So, a smaller guy could pull it off on a big guy, but i have yet to see it. i think most guys would drop their weight before getting put in that position.

Must go try on little brother.

That move is pretty effective on dummies. But not on a real person. I think that's more of a Sambo move, but can still be considered Jiu Jitsu. It reminds me a lot of Gegard Mousasi's trip on Sokoudjou. CompuStrike wrote:The CompuStrike program is in no way, shape, or form designed to judge a MMA event. It is designed to simply display a fighter's activity.

My older brother tried it on me. He's been training for about a year in Brazilian Jiu Jitsu. It took him about four tries. The first three tries he was doing whatever wrong, throwing me off on my side. Then, I told him, "push up and then push out with your left leg." Then I was caught in an arm-bar. It's not too hard to pull off when practicing but like every move, it has to be hard to pull off in a fight. At the same time, it has to be hard to defend, as well. I mean, you're vertical and they have one of your arms locked up... what do you do?

CompuStrike wrote:The CompuStrike program is in no way, shape, or form designed to judge a MMA event. It is designed to simply display a fighter's activity.