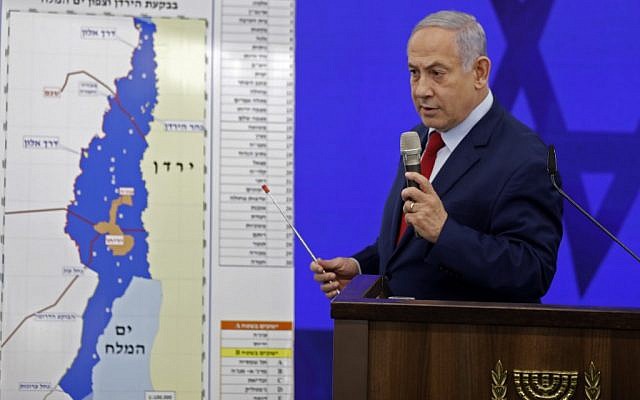 Benjamin Netanyahu has announced he will annex large swathes of occupied Palestinian territories if he is re-elected, a decision that for decades has been considered an endgame scenario for Palestinians’ aspirations of statehood.

The Israeli prime minister said on Tuesday that he planned to make the move, which would permanently seize up to one-third of the West Bank, after the election next week and hinted it may have been approved by Washington.

“I am waiting to do this in maximum coordination with [Donald] Trump,” he said in a speech broadcast live on Israeli television.

Netanyahu said the US president was likely to release his long-touted Middle East peace plan soon. US officials have suggested the plan will not include a Palestinian state, something Netanyahu has promised to never let happen.

A White House official said there had been no change in its policy and would not comment further.

Netanyahu, Israel’s longest-serving leader, is battling for his political survival and the announcement was interpreted as a rallying cry to his hardline rightwing base.

The prime minister stood in front of a large map on an easel that showed Israeli sovereignty extended over the vast majority of the Jordan Valley.

It appeared to display Israeli territory completely encircling the West Bank, slicing off the eastern border with Jordan. Jericho, a Palestinian city, and smaller Palestinian villages were displayed as enclaves that would not be annexed.

Netanyahu said: “Today, I announce my intention, after the establishment of a new government, to apply Israeli sovereignty to the Jordan Valley and the northern Dead Sea.

“This map defines our eastern frontier. We haven’t had this kind of opportunity since the [1967] six-day war, and may not have it again for another 50 years.” His comment referred to the war in which Israel captured the land.

Jordan’s foreign minister, Ayman Safadi, warned the plan would “push the whole region towards violence”. And later on Tuesday evening, Netanyahu was dragged away by his security team from a campaign rally in the southern city of Ashdod after air sirens sounded. The Israeli military said two rockets had been launched from Gaza, both of which were intercepted by its aerial defence system.

Saudi Arabia condemned it as a “dangerous escalation against the Palestinian people” and called for an emergency meeting of foreign ministers from the 57 member states of the Organisation of Islamic Cooperation (OIC), the official Saudi Press Agency said, citing the royal court.

Hundreds of thousands of settlers live in outposts in the West Bank, which Israel’s military continues to rule, controlling the lives of more than 2.5 million Palestinians.

The prime minister made a similar pledge in April to annex Israeli settlements, but the latest announcement appeared to extend to a much larger part of the Palestinian territories that border Jordan.

He made the earlier statement two days before an election in which he came out ahead with support from pro-settler nationalists. But Netanyahu was unable to form a coalition and forced a second election.

The senior Palestinian negotiator Saeb Erekat said that if Netanyahu’s latest plan went ahead, “he would have succeeded in burying even any chance of peace between Palestinians and Israelis”.

He added: “We need to end the conflict and not to keep it for another 100 years.”

Ayman Odeh, the leader of an alliance of Arab parties in Israel, called Netanyahu’s statement “not just election spin” but “a vision of apartheid”.

The international community considers Israeli settlements illegal under international law, built on land confiscated from Palestinian families. Extending Israeli sovereignty over such a large area would also be seen as putting an end to fading hopes for a Palestinian state, as there would be little unbroken land on which to create it.

Trump’s recognition of Jerusalem as Israel’s capital early in his term further damaged the two-state ideal. The Palestinians regard the occupied eastern section of Jerusalem as the capital of any future state, and cut contact with Washington after the declaration.

Why Netanyahu’s election threats could become reality this time
Peter Beaumont
Peter Beaumont
Read more
Earlier this year, Trump also recognised Israeli sovereignty over the Golan Heights, a plateau Israel captured from Syria in the same 1967 conflict and annexed in 1981. The move broke from the international consensus following the second world war that forbids territorial conquest during war.

Palestinians warned at the time that it set a dangerous precedent for land grabs in the West Bank.

In Israeli politics, however, annexation is a popular position. Israel has long stated it would want to keep the 2,400-sq km (926.65-sqmile) Jordan Valley to maintain control over the international border.

Benny Gantz, the head of the main opposition party, Blue and White, said Netanyahu had stolen his idea.

J Street, a liberal pro-Israel lobby in the US, said Netanyahu’s annexation plan “would destroy Israeli democracy and constitute a flagrant violation of international law”.

Jeremy Ben-Ami, the group’s president, said it would “make the occupation permanent and condemn millions of Palestinians to a future of living under unending Israeli rule, without basic civil rights or self-determination.”

Didn't Netanyahu fail to create a gov coalition recently? Is that a sign of waning influence in the party or just a minor hiccup? Not the most familiar with Israeli politics so figured this thread was the right place to ask.

Blows my mind that this guy still has support with all the corruption allegations...

bwawm wrote:Didn't Netanyahu fail to create a gov coalition recently? Is that a sign of waning influence in the party or just a minor hiccup? Not the most familiar with Israeli politics so figured this thread was the right place to ask.

Blows my mind that this guy still has support with all the corruption allegations...

I am not an expert on the Israeli political landscape. Netanyahu has been there for very long and many people can't stand him anymore. But those who like him are happy to overlook his corruption. Much like Trumpetrs.

That said there is a heavy investment in him. Sheldon Adelson helps finance his campaign and has a free newspaper that is a Netanyahu propaganda machine.

Israeli society is so skewed to the right, so blind to their atrocities and so in denial about the occupation and abuse and so against peace, that it won't matter much who ends up forming a government


This is only possible because of the illegal occupation