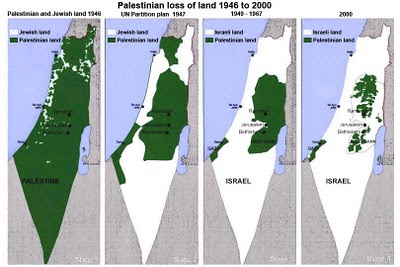 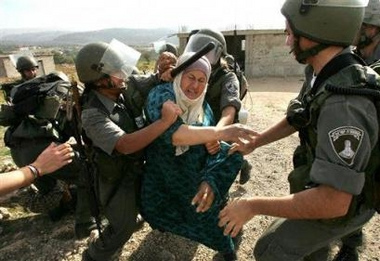 The world should not support Israeli abuse any more. 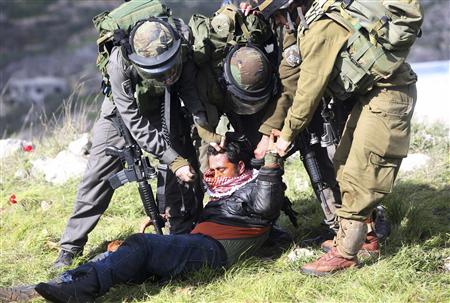 Reuters/Reuters - Israeli border police detain a Palestinian man after a group of activists set up tents and makeshift structures in protest against a nearby Jewish settlement in the West Bank village of Burin, south of Nablus February 2, 2013. Palestinians who set up a makeshift encampment in the occupied West Bank on Saturday clashed with Israeli soldiers and settlers and some light injuries were sustained.

Israel is fine. Its the palestinians you need to worry about. Who the hell elects a terrorist organization to be their government?

Israel is in a tough spot, literally.

Make a crater out of israel and i will be happy.

Overeem wrote:You guys better duck, because im bout to turn left, and i dont wana SMACK you with my dick

Reminds me of a joke King Abdulla of Jordan made a while back (when Saddam was still around)
He said, Jordan is in between Iraq and a hard place.

MurderfaceMMA wrote:Israel is fine. Its the palestinians you need to worry about. Who the hell elects a terrorist organization to be their government?

Palestinians voted for Hamas not for their policies but because of the corruption in the alternative (Fatah).

Israelis have voted for terrorists their whole lives, lets take a look next. But regardless of all of that, Israeli abuse has happened and continued since way before the Palestinians elected Hamas in 2005 and none of it excuses the abuse I have highlighted in my opening post.

Qualifications: Worked with Jewish terrorist groups Stern Gang achieve goals by violence.
Ben-Gurion became convinced that they would have to drive the British out if they were ever going to get their state. That required unity within the ranks of Zionism and they proposed a joint military campaign to the Irgun and Stern Gang who, until the autumn of 1945, they had solemnly proclaimed to be terrorists, fascists and madmen. And Begin, who, during the Saison, had put up wall posters comparing them to "Quisling and Laval", eagerly accepted. -- Quote from Haber, Menachem Begin, p.146.

Ben-Gurion was head of the Jewish Agency. After the adoption of the united front against the British, Ben-Gurion directed the terrorist "war" from the shadows. At this time, it was he who gave the "green light" for nearly all Jewish terrorist activity. The public relations disaster caused by the King David Hotel bombing, bought the detente with the Irgun and Stern Gang to an end (the Jewish Agency denounced the attack, claiming that the Irgun had violated its specifications as to when the bomb should be set). After directing the 1948 war to conquer Palestine and drive out its inhabitants, he became Prime Minister. An ideas man. It was his idea to create a civil war in Lebanon in order to establish a Maronite government that would align itself with Israel. Although it was difficult to ignite this civil war, their continual efforts over the years were eventually successful (and hundreds of thousands died). A truly evil man.

Qualifications: Singularly unsuited for the job of Prime Minister of Israel. Before becoming Prime Minister, was neither a known terrorist nor war criminal. However, in Feb. 1973, as Prime Minister, Golda Meir authorized the shooting down a Libyan civilian airliner over the Sinai by Israeli jet fighters, killing all 107 passengers and its French crew. So it seems she was more suited to the job than was initially apparent.

Qualifications: War Criminal. In 1948 (on instruction from Ben Gurion) ethnically cleansed some 70,000 Palestinians from Lydda and Ramleh. This included the massacre of several hundred resident civilians (to get them moving). In 1967 Rabin ordered the ethnic cleansing of some 5,000 from the villages of Emwas, Beit Nuba and Yalou and the dynamiting and bulldozing of their homes.

Qualifications: Killer. Terrorist. War Criminal. Operations commander of the terrorist Stern Gang. Responsible (with Began) for the Deir Yassin massacre. The organiser of two infamous assassinations: the killing of Lord Moyne, the British Minister Resident for the Middle East, on 6 November 1944; and the slaying of Count Folke Bernadotte, the UN's special Mediator on Palestine, on 17 September 1948.

Qualifications: Ordered the Grapes of wrath operation that targeted a civilian shelter in Qana killing over a hundred civilians mostly women and children. Then became Israel`s president.

Qualifications: Assassin. In Beirut 1973, Barak (while dressed as a woman) assassinated the Palestinian leader Kamal Edwan, together with his wife and seven year old daughter. Other members of Barak's death squad, killed Abu Youssif al-Najar, the poet Kamal Nassar and their families.

Qualifications: Killer. Terrorist. War Criminal. Presided over the massacres of some 2-3,000 civilians at the Sabra and Shatilla refugee camps in Beirut. Founded Unit 101 (a notorious death squad within the Israeli Defense Force). For many years, commanded cross-border Unit 101 raids, for example, the 1953 massacre at Qibia (Kibya) where civilians were blown up inside their houses (and shot dead if they tried to flee).

The USA is Israel's bitch. The sun will shine brighter on the world if the Middle East destroys itself. Everybody gone! Israel, Palestine and those fucking Arabs in their little gay "brotherhood" of camel fuckers.

detfilteg wrote:
I keep forgetting how important rules are to humans, especially the ones who enforce them. We wouldn't want people getting their little feelings hurt by something someone typed online now would we?

Will, dont bother wasting your time.

will, the info you've posted is very biased.. a lot of half truths, distortions of truths, taking things out of context, different moments in history, and even some outright lies.

the 3 major arab israeli wars (48', 67' and 73') were all initiated by the arabs.... the occupation of lebanon was a result of continuous attacks towards israel.
the palestinian nationality is an invention of modern times. they were not a distinct / separate entity before 1947. and one could even argue that there already is a palestinian state... Jordan, where the majority of the population is palestinian.

if palestinians and arabs would not show any aggression towards israel i assure you no aggression would be shown back and peace could be reached quickly..if israelis would lay down their arms today i don't think you can make the same claim.... tragedies unfortunately do occur when an army is forced to intervene against guerrilla fighters (palestinian militant groups) intentionally fighting out of highly populated palestinian civilian areas. the palestinians are forced to do this because it is the only way they can be effective, and israel is forced to respond because it has to defend its civilians.. inevitably, sometimes innocent people are hurt...despite the great lengths the israeli army goes to, in order to avoid palestinian civilian casualties.

the truth is a lot more complicated than the demagogic propaganda you posted so i suggest you review your history or at the very least attempt not to be so blatantly biased.

when i discuss the arab israeli conflict, i always try to view and present both sides of the argument.

as a final note, i will say, from personal experience, that the israeli army really makes a huge effort to avoid civilian casualties. yes, there are examples of asshole soldiers and operational errors that have had a terrifying cost... but this is unfortunately inevitable when a huge organization like the israeli army operates within tightly populated civilian populations.

also, today, i don't think there are many warzones throughout the entire world where the press is more free to operate in comparison with that which occurs in israel/palestinian territories.

more food for thought. testimony regarding israels operation "cast lead" that occured during the winter of 2008â€“2009

"I made the wrong mistakes" Thelonious Monk

^^Damn, will just got rattlesticked in the ass.


rattle:i was thinking the same thing about the source, and objectiveness of the facts. All the things mentioned were whats, not why's. here's a picture of those assholes blasting another asshole! 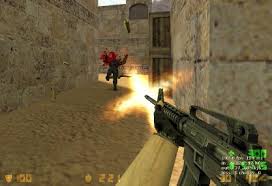