...Bob Arum Gets Out Of The Way


Prospects for a Floyd Mayweather Jr. vs. Manny Pacquiao fight happening in 2015, which appeared highly positive just days ago when Pacquiao said he had agreed to all of Mayweather’s terms, now suddenly look bleak, as Mayweather and his camp appear to be waging a campaign to push Pacquiao’s promoter, Bob Arum, out of the talks for the fight.

Arum promoted Mayweather’s fights until 2006, but Mayweather parted ways with Arum on acrimonious terms. Mayweather paid $750,000 to get out of his contract with Arum, then in 2008, filed a lawsuit that claimed Arum shortchanged him on his cut of the purse from two major fights.

Arum countered by claiming that he was withholding the payments until Mayweather forked over cash that the fighter owed to Arum’s company, Top Rank.

Mayweather also alleged that Arum had deliberately held back his career, and refused to finalize a deal for Mayweather to fight Oscar De La Hoya — another former Arum client who had a bitter split with the promoter — in 2007. Mayweather and De La Hoya fought in one of the top-grossing fights ever, after Arum, pictured below, was out of the way.

Now Mayweather, whose rift with Arum has never been healed, wants the same thing to happen for the proposed Pacquiao fight.

Appearing on the online hip hop interview program, The Whoolywood Shuffle — hosted by DJ Whoo Kid — Mayweather broke his silence regarding the Pacquiao fight talks, claiming that he “absolutely” wanted to make the fight with Pacquiao, but there’s no deal on the table yet, and may not be as long as Arum’s company is involved.

“I’ve been saying this for a long time, Pacquiao has no say because he fights for Top Rank Promotions. He’s not in a position to call the shots right now. He’s not the A-side. I have Mayweather Promotions, it’s my company,” said Mayweather, whose 47-0 record could face its greatest threat in Pacquiao.

“He has a boss, it’s called Top Rank Promotions, not Pacquiao Promotions,” Mayweather continued. “We’re trying but its been extremely difficult. I don’t want to point the finger at Pacquiao, it’s not him, it’s his promoter.”

“It’s not going to happen. We’re fighting May 2nd but it’s not going to be Manny Pacquiao,” Ariza said. “Hopefully eventually Bob Arum will blow away in the wind or whatever. As soon as we get rid of him, we can get it on.”

But with Arum firmly entrenched as Pacquiao’s promoter, that situation appears unlikely to change, and Pacquiao said this week that he would “move on” if Mayweather did not sign a contract to fight him by the end of January, with top British contender Amir Khan mentioned as a likely opponent if the Floyd Mayweather Jr. vs. Manny Pacquiao fight falls apart.

http://www.inquisitr.com/1775265/floyd- ... dHe1CER.99
When engaged in combat, the vanquishing of thine enemy can be the warrior's only concern. Suppress all human emotion and compassion. Kill whoever stands in thy way, even if that be Lord God or Buddha himself.

Well... That's a steaming pile of shit. But this is why I refuse to get excited about this match up until its signed and official.

None of this is at all surprising. Mayweather has never once moved on the fact that he will absolutely not make this fight if bob Arum is involved. But Pacquiao won't kick him to the curb, so it won't happen. And it's a shame, because Arum is and has always been a fucking leech and Manny seems content to let him bleed him dry while he's fighting further and further past his prime.
UP THE IRONS!!!!

mikalianenkomedov wrote:ball gargling faggots that are faggoty and gargle balls.

Get that old fuck out of there. There is no need for him to promote this fight.
Sig 0-1 UchiMata wrote:Well... That's a steaming pile of shit. But this is why I refuse to get excited about this match up until its signed and official.

I don't get excited until they are both in the ring or cage (depending on the sport). Injuries, etcs..

UchiMata wrote:Well... That's a steaming pile of shit. But this is why I refuse to get excited about this match up until its signed and official.

I don't get excited until they are both in the ring or cage (depending on the sport). Injuries, etcs..

Good point. If that happens, when we start all over again. I guess its a good thing that this isn't happening, I heard a rumor that PPV was going to be damn near $100. I ain't paying $100 for a fight that should've happened 5-6 years ago.

Ive lost hope for this fight years ago, didnt fall for it again. both Arum and Mayweather always seemed like they didnt want this fight made. Only Pacquiao seems to legit want this fight but I dont think he has the cunning needed to get rid of that sleazy old fox in Arum or the trash talking skills to kind of force Mayweather. 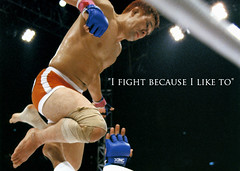