Humbled Francis Ngannou ready to put disappointing 2018 in the past
https://sports.yahoo.com/humbled-franci ... 13451.html 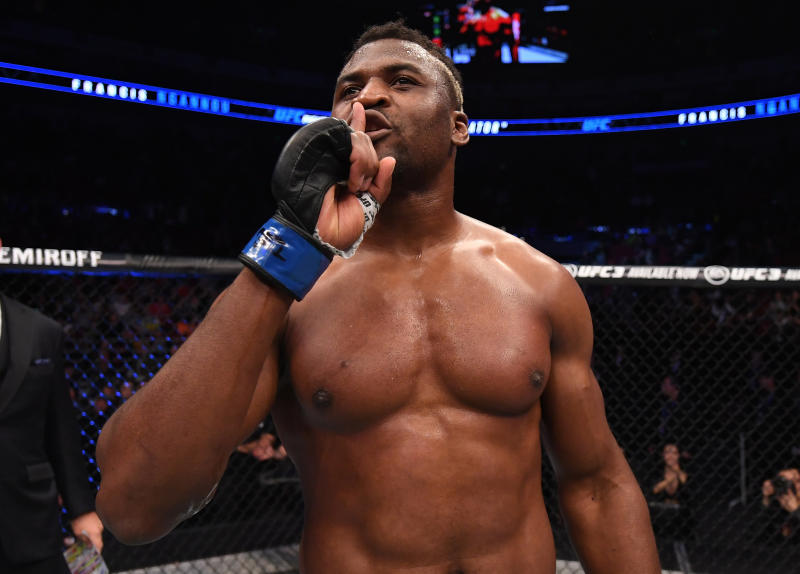 Francis Ngannou slowly repeats the question — Was 2018 the worst year of your life? — and pauses before beginning to answer.

A month earlier, after Ngannou had laid waste to Alistair Overeem with one of the most frightening hooks you’d ever want to see, UFC president Dana White could barely contain his glee.

Just like in the Ronda Rousey days, his fights were over before the fans had a chance to dig into a box of popcorn. Bojan Mihajlovic was knocked out in 94 seconds. Anthony Hamilton was submitted in 117 seconds. Ngannou needed only 92 seconds to stop Andrei Arlovski and took just 10 seconds more to nearly decapitate Overeem.

White would often pal around with ex-heavyweight champion boxer Mike Tyson and he undoubtedly saw a lot of Tyson in the massive 6-foot-5 Cameroonian.

It was, for a while, as if he were the anointed one. Many believed that it would take just a couple of big shots before Ngannou would ascend to the throne.

Now, 13 months later as he prepares to fight Cain Velasquez on Sunday at the Talking Stick Resort Arena in Phoenix in the main event of UFC on ESPN 1, the hype has disappeared.

Oh, Ngannou was back to his old ways in November, obliterating rising star Curtis Blaydes in just 45 seconds in a Performance of the Night-winning knockout in Beijing.

The win over Blaydes, though, as impressive as it may have been, couldn’t totally waft away the stench from his previous two bouts.

Ngannou, now 32 and humbled by back-to-back losses to Miocic and Derrick Lewis, feels like a veil has been lifted from his eyes. He sees now, he says, what he didn’t see then.

“My whole life, I’ve lived with struggle and I have had to face adversity,” he said. “A lot of it. Believe, there was a lot of adversity in my life, but I was able to overcome everything. Somehow, I always managed to make it and that keeps me strong.

“I look at last year as a learning year. I don’t have a lot of experience in this sport. I took up the sport late and I didn’t know everything you need to be able to be successful. This is a very difficult sport and you have to know how to live the life of a fighter. It’s not just [technique]; it’s more than that. It’s understanding what it takes to be the best. I had to learn that.”

More perplexing than his title-fight loss to Miocic was his loss to Lewis in what many regard as one of the worst fights in UFC history. That fight, at UFC 226 in Las Vegas, was the one fight so many people were looking forward to in that it pitted two of the sport’s hardest hitters against each other.

But Ngannou spent the majority of the fight moving around, circling, looking for an opening he never found. He didn’t punch. The power in his hands is useless if he never threw them.

That fight caused Ngannou to do some soul-searching.

He laughed when asked if he determined why he was fighting.

He came from a very poor family in Africa, he said, and had far more struggles than he’s ever experienced in the cage. The fact that he got a title shot in less than five years after taking up the sport was hugely significant, even if the world didn’t recognize that.

He said that in his earliest days, when he still wasn’t entirely certain what mixed martial arts was, he searched YouTube for the term “UFC heavyweight.” The first video he saw was a collection of Cain Velasquez highlights.
I'm so fucking high.